So, I’m in Florida, a little over half-way through my ‘me’cation, and have had a lot of ups and couple of downs!  I found the Clearwater Beach Library and just needed to write.  I try to journal, but I’m very undisciplined at it.  Having this blog makes me write for some reason, and I like it!

I had a bit of a panic/stress attack when I got to the hotel on Friday afternoon.  I called my son and my mom and said I wanted to come home the next day and cried to them.  But, after sleeping like a log in my hotel (more about that in a bit), I felt much better!

The hotel isn’t QUITE what I expected when I book with Expedia.  And, that is a major understatement!  I think the last update it had was 1970 or so, and the carpet, walls and bedding show it!  My pillows (they gave me 6…I guess I’m supposed to stack them) feel like someone took a pillow case, shoved a handful of toilet paper in it, and called it a day!  I killed a few bugs, and their friends have now taken up residence.  From what I understand, that’s pretty normal in Florida, but I’m not crazy about crawlies when I’m trying to sleep! 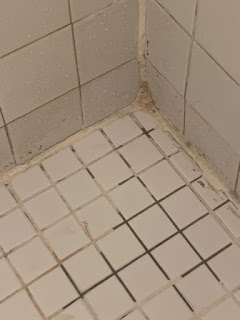 On Saturday, I walked the beach early in the morning, and found a sand dollar!!  I’ve never found a whole one before!  There are tons of shells, and the beach is fantastic…talcum like sand with amazing views!

I’ve watched the sunset on the beach every night I’ve been here.  It’s so beautiful and a really big thing here!  After it goes down, everyone cheers!  BUT, watching EVERY single person on the beach take pics with their partners, while I’m slogging on alone, is a little tough!  It’s very romantic.  For them!

The food around here is great, and Pier 60 has live entertainment and tons of cool things to do.  You can walk around all day and not get tired of all that you see!

Yesterday, I went to the Scientology Spiritual Headquarters in Clearwater.  I tottered a few miles there over a huge bridge, and it was a bit of a trek but worth it!  I wasn’t allowed in that particular building, but ventured to the Scientology Information Center and saw a bunch of videos, displays, and reading material and had a great conversation with the Scientologist manning the front desk.  She was very sweet, but her answers seemed extremely programmed.  Also, there are a lot of Scientologists walking around and to be honest, it looks a bit creepy!  Everyone wears a white shirt, dark blue pants or skirt, and a blazer.  No one smiled or talked to me, UNLESS I did so first.

I teach a lot about Scientology in my Sociology classes, and I’ve read so much about their abuses and how families are destroyed when 1 leaves and becomes an apostate.  It’s so sad that something that COULD have been really helpful to people is used so abusively against them.  Money taken, physical abuses, mental manipulations.  There are too many ex-Scientologists out there for me NOT to believe them.  I also don’t know why they call themselves a church.  In the videos, you hear the word ‘spiritual’ a lot, but never the word God.  Hmmmmm.  I was also surprised by how compelling the info center videos are and how someone could be persuaded to join!  They make it sound like ‘going clear’ will literally give you new life and remove every bad memory you’ve ever created so your brain can start fresh with only good in it.  For someone struggling, this is a powerful message!

I got a copy of L.Ron Hubbard’s Way to Happiness (which you can read here), where he outlined 21 precepts (rules…I had to look this up!) that we should all live by.  I pretty much agree with most of them (and in the parantheses I wonder if the Scientology org really does it):

So, the info sounds good on the surface, and makes sense.  But really, L. Ron took Freudian principles along with his weird ideas in terms of science fiction, and put them together to create this ‘religion’ he could be the king of.  L. Ron…why didn’t you use your apparent talent for writing and philosophizing for GOOD???
Today isn’t going so great.  I traipsed to the Clearwater Aquarium which is all about rescue, rehabilitation and release.  It was really cool…I saw sharks, sea turtles, otters, dolphins, sting rays etc.  But I’m having a down day…my depression is bothering me and it’s hard not to share all of this with someone.  There were so many times I wanted to turn to someone and say something about what I was seeing but I couldn’t.  Doing everyday stuff alone isn’t bad…doing fun vacation things alone can be.
So anyhoot, just wanted to write a bit and am going to get to the hotel, kill my new bugs, get ready for the beach, and enjoy the water for a couple of hours.  Just relax.  That sounds pretty good to me.
Kristi xoxo

Bringing Happiness to Your Home

Welcome to my world

Vision of the Night

To Write or not to Write and What to Write