So, I was thinking the other day (I know, that’s a first) while looking at social media and I started counting the number of times people say “I love you”.  It was staggering.  Now, I’m not saying that’s a bad thing at all, but I wonder if we use it in a casual context so often, that it loses some of it’s meaning.  I say “I love you” regularly too, and I know I mean it when I do.  But I also know there are so many different levels and kinds of love that I’m not sure I’m expressing what I intend too.  However, that intention often times doesn’t have any other words for me to use.

In Russia, the equivalent word for ‘love’ is most often reserved for romantic relationships, and isn’t often said between family members.  In Asian cultures, ‘love’ is rarely brought up.  Instead, it’s shown through actions and care.  Same for Indian culture (which I know is Asian but they are often looked at separately) where ‘love’ is woven into the fabric of the culture as a whole.

I know that some people use the word ‘love’ very loosely.  How can a person have true love for someone one day, and then decide they don’t love them the next?  Obviously, actual love wasn’t there.

I’ve heard the word love in all of my serious relationships: 3 marriages (shutty the mouthy) and 1 dating relationship.  In each, we used the word often, and I’d like to think love was truly a part of these.  But, all of these ended, and when they did, that was it.  Two ended because of infidelity and the others over issues that could have been worked out had my hubbies been willing to go to counseling.  Unfortunately, they weren’t.

So, I guess what I’ve been pondering is this:  what word would I rather hear other than ‘love?’  Everyone says the magical words in a relationship are I LOVE YOU…they are apparently the most important to hear, but are they really?  If we are throwing around these words so casually, are they truly defining the actual feeling or emotion they’re supposed too? 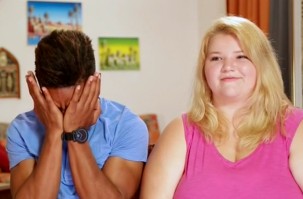 Take 90 Day Fiance’ (my favorite show…I literally can’t stop watching it every season).  The people on it might talk to their beloved once or twice online and suddenly they love them to death and are convinced they found their soulmate!  HEH?  You don’t even know them yet!  You haven’t seen them in person…touched them…smelled them…or actually got to know them!  THEN, when they do, guess what??  Often they realize this isn’t their soulmate (go figure) and suddenly, the love is gone.  Hmmmm…was it really there to begin with?

Are we so ‘starved’ for romantic love that we will label it, hoping that it becomes a self-fulfilling prophecy?  Do we think that if we say it, it will have to be?  Are we under the impression if we don’t say it, the person will just leave us willy-nilly?  Is saying it something that’s simply ‘expected’ but not actually there?  Or, maybe we say it to a potential mate who we feel isn’t as interested as we are, so that maybe our declaration will affect their feelings and make them stronger.

I’ve been considering what I would like to hear if I ever (and it’s looking grim) get into another relationship.  Do I want to hear the word ‘love’ again?  I really don’t know.  I’ve heard it used so often, and then thrown away so easily, that I’m not sure I trust what that word really is.  Of course I want love to be a part of the relationship, but the words just aren’t enough for me anymore.  I guess I want to feel the love, not hear the words expressing love.  I want to feel the connection.  Experience their care of me.  See their work in terms of the relationship.  I think those would all be bigger expressions of what we have rather than a quick ‘love ya’ before bedtime.

When it is words that are said, I’ve figured out what would be so much more meaningful for me to hear.  How about “I’m so proud of you!”  Or, “Wow, I really missed you today!”  I’d like to hear, “You know, I really need you in my life.”  Or, “How did I get so lucky to have you?”  The real clincher for me would be, “I’d be so lost without you…I’ll do anything I can to make this work.”

And you know what?  I haven’t heard these before, and I’m wondering if that’s why my relationships have all failed.  The word ‘love’ was there, but did they have pride in me?  Was I important enough to miss (apparently not)?  Did they feel such a need for me, that without me, they’d be lost?  Did they feel enough for me that working on the relationship wasn’t considered a hardship, but a necessary thing they were willing to go through to strengthen our bond (another apparently not)?

You know, I love watching American Idol videos on YouTube and today I had one on while washing dishes.  It was a couple who sang country songs, and they auditioned at the same time, but sang separately.  They both played the guitar, and then each played along while the other sang.  Obviously, they were both hoping to get a ticket to ‘Hollywood’ (meaning they were continuing in the show).  After each sang, the judges praised the woman for her great voice and then told her husband that he sang well, but at this point in his career, he would be much better as her backup, and not a lead singer himself.  Here’s what got me:  when they got out of the audition, the man hugged his wife so tight and told her how very proud he was of her.  She asked if he was upset he didn’t make it himself, and he said NO…that everything happens for a reason and he was just so damn happy for her.

I was bowled over.  I think a lot of people (men & women) would feel a bit of jealousy.  A feeling of having ‘lost’. But this guy?  He won because she won.  Isn’t that awesome?

I don’t know if there’s another relationship on my horizon or not.  But I’ll tell you this:  I’ll realize it’s the true thing if Mr. Wonderful says: “Damn.  You are just it for me.  I am so proud to have you.”  Doesn’t that just sound great?

Judaism, work, life, etc. Not code for "single and looking". This is not a dating blog.