So, need is a funny word.  Like ‘love’ or ‘friend’, it can mean so many different things to different people.  Go shopping (after social distancing, of course) and listen to what is being said about all of the products we are inundated with:  “Oh my God…I gotta have that!” “OOOOO…this new shampoo is supposed to be great!  I need to get it now!”  “Wow…that’s the exact shirt I’ve been needing!”

Actually, need is so different than want, yet we often forget that.  Do we really need another shampoo when we have 12 full bottles in the shower?  Do we really need a new shirt when we have 10 others we haven’t worn yet?  Hey, I’m just as guilty as anyone.  Put me on amazon, and I will order something…anything…because getting that brown box on my step with the shiny tape is just so damn exciting.

But let’s face it, we don’t need half of what we have.  And often, we don’t even want it a few days later.  It’s just something else cluttering up our house that will wind up in a donation box sooner or later.

Clutter.  I know all about that too.  Not because of my house since it’s fastidiously clean, but because of my mind.  Clutter is such a great term to describe the emotions and thoughts that circle around it every day thanks to being bipolar (😬).  Sometimes it’s hard to sort out the clutter; it becomes so overwhelming I simply don’t know where to start.  That was me yesterday.  My clutter was strewn all over the place and I needed someone to help me sort it out.

I miss O moving to his own place (even though I’m so proud of him for being able to make this leap while still running a business in these difficult times), I’ve been working on my house to get it more ‘me’ and moving furniture around until it’s just right.  I’m doing a deep cleaning and a good cull, while also getting used to the quiet which frankly is a bit tough.  Then I have school to deal with during this pandemic…I missed my students and seeing them graduate this spring and I still don’t know what the Fall will look like in terms of my classes.

And then I have me.  Lonely old (shutty the mouthy 😳) me.  I had to run to the store yesterday and I interacted with the cashier (barely, which was probably a good thing since her face mask looked to have some kind of demon on it and she had the personality of a turnip).  I talked to ma for about 10 minutes and texted O a few times, and that was it.  I’m used to talking to 60+ students a day, my colleagues, and living with a noisy son who always had something going on.  This quiet is really a big change for me.

See, yesterday I had a need.  A real need.  I needed to vent to someone so I could process some of these feelings I have being alone.  I guess I just needed a virtual hug.  Needed it, not just wanted it, because I was also feeling a bit lonely too. 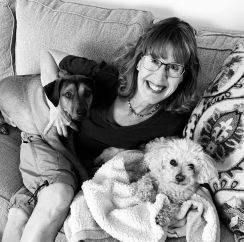 So, Edward gave me one (one of my sweet dogs who happens to be a damn good hugger).  But as much as I love his affection (while Dottie usually looks on with disgust but decided to smile for the camera since she’s a diva), I needed a real person and reached out to a ‘friend’ who said they had had a bad day too.  We messaged back and forth for a bit and I poured a lot out to him…it felt good to have someone just listen.  His responses though were quite brief such as “It’ll get better.”  Well, duh.  Of course it will.  However, it wasn’t better then, and I “needed” someone to just be there to commiserate with me, or at least validate that what I’m feeling is OK.  It’s like when I got my appendix out a few years ago (on April fools day, no less).  I got home and couldn’t bend which is something you don’t appreciate doing until you can’t.  It was horrible trying to contort myself into a chair or my bed and realized I couldn’t do it without feeling like I was going to break in half, so I needed Hubby 3 (🙄) to help.  I knew I would heal, but at the time of the pain, that wasn’t much comfort to me (although wine helped…and believe me, it was NEEDED at that time).

Anyhoot, as I was saying how sorry I was for my friend’s day, he said he just didn’t have the wherewithal to chat with me right then, so we stopped.  And the problem was that I still needed him.

Yes, I know he had a bad day too and I expressed my concern over his issues and listened to what he needed to say.  If he would have asked me to do anything for him in this situation, of course I would have (hello…I’m a freaking empath).  It’s almost like when I was a young parent:  I’d be running on 2 hours of sleep for 3 straight nights when O was sick, but if he needed something after I nodded off, I got up and did it.  He NEEDED me.  It was as simple as that.

Maybe I didn’t express how much I needed my friend’s support yesterday (even though I said “I need your support this afternoon”), but it’s very hard for me to really do that.  I feel guilty when I ‘need’ something from someone…when I ask for it.  I feel selfish for needing them to ‘give’ me their time, their energy.  I sometimes feel like if they give me an hour, I have to give them 2…I never want to be the one that takes more.

Or, maybe it was difficult for him to understand my situation yesterday, or relate to it since his is so different.  I think it’s also baffling for others to understand that when you have bipolar, a seemingly ‘little’ issue is actually a pretty big one because of our emotional constitution and constant rumination.

Hmmmmm…do we ever ask ourselves what we truly need from a partner?  Not what we want…but what we need, and what we think of as being essential to our well being.  I think about this a lot because in my Marriage and Family classes we talk extensively about mate selection…what you want, what you need, what are deal breakers, etc.  And for me, I need someone to just listen.  To be there.  To say “Hey, I understand this is a tough time…what can I do to help?”

I think it’s because when someone fulfills this need, it makes me feel special…like I matter to them.  I feel like they see me.  One time J and I were in an argument, and I yelled “See me!” to him.  I was so frustrated that day and needed him to actually see the real ‘me’, not the person he wanted me to be or how much he needed me to pretend I was fine. Yesterday made me realize that my needs in a relationship have changed over the years. Decades ago, I would have said I needed someone to be a good dad…good provider (since I wanted to be a stay-at-home mom), affectionate (since I’m so touchy/feely), and a great sexual partner (😲).

Compared to other times I’ve had, yesterday was a cakewalk.  But what happens when there’s something seemingly insurmountable for me to handle alone? And having bipolar makes this a very real possibility.  I know I need someone I can trust to be there for me. Will be able to understand that I’ll have issues that at times may seem silly to them, but for which I’ll require their support.  Their understanding. I need someone who will try to learn what they can about bipolar since it is a mental illness that’s difficult on relationships; anyone living with someone bipolar has to understand the dynamics of depression and mania.  And just so you don’t think I’m a selfish cow, I don’t demand that only my needs be fulfilled in a relationship, and I’m not asking for anything I’m not willing to give back. In fact, sometimes meeting my needs is pretty easy; yesterday, an ear or a hug would have sufficed.

When everything was crashing down on me a couple of years ago, some of my students who read this blog tell me they never would have known based on my demeanor in class and talking to them in the halls.  Good!  I would push aside my own crap in order to fulfill the needs these awesome young people had…and happily so.

Maybe it would be a good idea to just make sure I seek what I need:  someone to  listen, give me affection, attention, and understanding (and don’t read this part ma, but throwing in great sex would be appreciated too 😜).  But maybe these are too much for some people to handle, or too much for me to ask for in the first place.  Or maybe, just maybe, I need to learn to fulfill these in myself to a great extent.  I need to listen to myself, be good to myself, give myself the attention I deserve and the patience I often don’t allow myself to have.  And when I think about it, this might really be a great idea.  After all, I’m pretty good at helping others out…maybe it’s time to do the same for me.

2 thoughts on ““The most important things are the hardest things to say.” ~ Stephen King (The Body)”