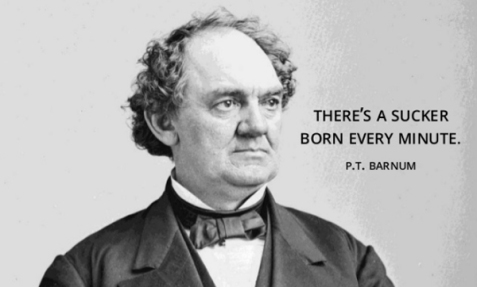 So, y’all are going to look at me differently after this post because of what I’m finally willing to share with you.  I don’t even know if my own parents realize the magnitude of the problem so I’m just going to jump right in and say it outright:  “My name is Kristi and I’m a sucker for infomercial products.”

There…I’ve said it.  After all of these years holding it in, pretending to ignore the TV when the ShamWow guy was on, and lying about what was coming to the house in boxes before amazon (actually, before the internet 🙄), I am finally free.  It feels good. 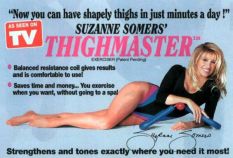 My problem started in the 1970’s when I realized something was wrong.  I’d see an infomercial and suddenly knew, within the recesses of my brain, that I needed that product to make my life better.  I’d get excited.  Giddy.  I’d daydream about the day a Thigh-Master would arrive on my doorstop and I’d suddenly be transformed into Suzanne Sommers, even though I had short brown hair, no boobs, and a face that resembled a sausage pizza.  Didn’t matter though…I knew it would work. 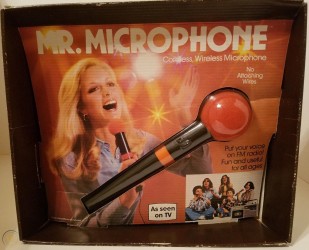 When the Mr. Microphone commercial would come on the air, I’d be hypnotized.  You could plug this mike into a radio and then broadcast your voice over the airwaves.  It had a had a black handle and big orange ball on top that you spoke into and it looked like a blast!  In the commercial, there are teenagers driving around in their car talking to people on the sidewalks, and one guy sees a pretty gal and says, “We’ll be back to pick you up later!”  How could anyone not want one of these?  (Decades later, O’s dad bought me a home karaoke machine and I used it one night to sing to him.  Hmmmm.  Come to think about it, our marriage started unraveling at the same time.  Huh.  What a coincidence).

When I got to my teens and started listening to music the ‘newest’ thing out there, ‘cassettes’, I joined the Columbia House subscription program a few times.  You’d see their ads everywhere and you could choose 11 cassettes for FREE and then another one for just a penny!  Twelve cassettes for a cent!  Seriously, what person can afford to pass this up?  The catch?  You’d get a flyer and response card every month in the mail so you could order cassettes to fulfill the obligation of the subscription (which was written in very small type).  Now, if you forgot to mail back the card by a certain date, you’d get 2 crappy tapes in the mail and be charged about $40 (This was a LOT in the 80’s…bear in mind that my first fast food job paid $2.85 an hour 😳).  And the problem was that you never wanted any more tapes since there were only 12 on the list that were any good.  So, I tried different tactics to get out of this obligation. 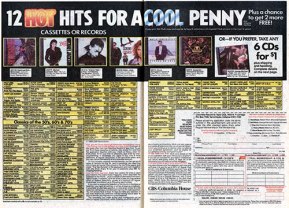 At first, I tried to ignore the fliers hoping this nightmare would just go away while hiding the tapes they kept sending me  under my bed.  Eventually, I got a nasty letter saying I owed around $200 for what I’d been sent, and I had to tell ma.  I was scared I’d be locked up if this continued (I think someone like Al Capone ran this operation and getting my thumbs broken was a real fear).  Well, I’ve seen ma mad in my life, numerous times (really, too many to count) but this was a biggie.  Suffice it to say I have never, ever said the words Columbia House in her presence for the last 40 years.  (Note:  I did join again in the 90’s when they started offering CD’s and yes, it was also a nightmare).

Things really got bad when I married Hubby 2 and was home taking care of my baby.  When O was napping I’d have the TV on to hear an adult voice, and the commercials showed me what I was missing in my life trapped in a house with a colicky son.

I gained 60 pounds when I was preggie (shutty…I know I was only supposed to gain about 25 but those oreos tasted so freaking good and my baby needed them 🙄) and wanted to get back in shape.  So, I turned on my favorite channel during this time (when I wasn’t watching All My Children), QVC.  God bless QVC…I still know my membership number by heart after all these years.  Anyhoot, they had an ‘Body Slide’ which was supposed to mimic speed ice skating and get you in shape fast.  Since I’ve never been able to ice skate, have no coordination to speak of, and get motion sick moving in any way but straight ahead, I figured this would be a great idea for me. 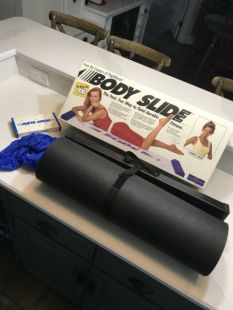 When I opened the box, there was a rectangular plastic mat with 2 small spongy things on each side, and a pair of see through ‘booties’.  I got the mat set up in the living room while O was in his little play pen, put on the booties, and tried to zip side to side like the guy on QVC did.  I fell.  In fact, I fell or slid off the mat the first few times I was on it.  My poor son was watching with a horrified look on his face…I think he realized this klutz was actually his mama.  After a few bruises, I sorta got the hang of it as long as I bent my legs, put my butt up in the air, held out my arms like a friggin’ tight rope walker, and used hip thrusts to gain momentum.  Hubby walked in the door when I was doing this and said:  “What the hell are you doing?  You look crazy on that thing.”  So much for him appreciating my attempt at being beautiful.  🙄

When I saw the Bedazzler, it was love at first sight.  Pure and simple.  Yes, I’m a tomboy and I always loved doing stuff with my dad and grandpa because girly things just didn’t interest me much.  BUT this?  A ‘machine’ that attached gems to anything you wanted?  My gosh, I’d look like a freaking rock star.  I ordered it and checked the mail every day, and when it finally arrived, I wanted to send out announcements like I did for O when he was born. 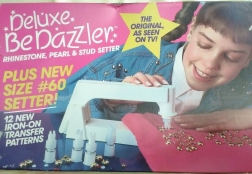 Anyhoot, I lovingly took it out of the box, got my denim jacket out (very chic) and went to work. On the box, it shows a 10 year old bedazzling her heart out so I knew this was going to be easy peasy.  Out of the 100 gems that were included, I was able to successfully attach 2 in an hours time.  I was bawling and Hubby came in the kitchen to see me with tears streaming down my face, stuff dripping from my nose, a Bedazzler machine in my hand, and a jacket that had 1 red gem and 1 blue gem on it.  He picked up the machine, scooped up the scattered gems, marched out the door, and plopped it in the trash.  It was an act of mercy.

But even though my luck with these products was pretty bad, I knew the Clapper would work!  My God, even Hubby would like it because it would save on power bills.  You simply plugged the Clapper into an outlet, plugged in your lamp, and when you’d clap, the lamp would turn on…clap twice and it was suddenly off.  How could that fail?  Even hubby was slightly excited about this and we got it set up before traipsing off to a church event that night. 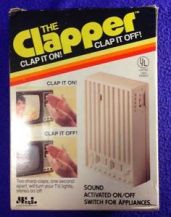 When we were coming home, we could see the light in our living room going off and on like a disco.  We went in the house and our little dog Scooter (who Hubby wasn’t fond of and the feeling appeared to be mutual) was barking incessantly like he always did.  Every bark turned the damn light on, and then he’d bark some more and turn it off.  Another gadget that was eventually thrown away since the constant on and off was causing Hubby and I to both to have pretty severe headaches 🤨.

So times have changed…right?  I’m a tenured professor with 3 degrees under my belt, 30 total years of teaching experience, and the mama of a 26 year old.  I’m done with all this crap.  No more George Forman Grills that splatter grease all over my cabinets and face (so I get zits every time I cook)…no more Sham Wows that shrink a quarter of it’s size every time it’s washed until it’s basically the size of a tootsie roll…no more Slap-Chops that make me feel like I’m doing something naughty when I use it…no more Cami Secrets since full size cami’s are pretty comfy anyway…no more wanting, more than anything, to call the Psychic Friends Network for a reading about my love life (or lack thereof).  I’m done.  I’m mature, experienced, and media literate in terms of advertising. 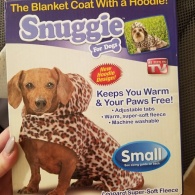 However, now that I think about it, the Snuggi for dogs would be really comfy on Dottie and Edward in the winter.  And the Tub Shroom would keep my hair out of the bathtub drain…that would be nice.  And maybe a set of Bare Lifts for my saggy boobs or Booty Pop undies to make my butt look better so I can get a date?  Hmmm.  And that Sonic Scrubber would probably work great on my bath tiles…would probably save me tons of cleaning time.  And wow…the bright light pillow would make my bedroom look like a fairy-land every night…might make me sleep better.  Huh.

9 thoughts on “If you say ‘gullible’ slowly, it sounds like oranges.”