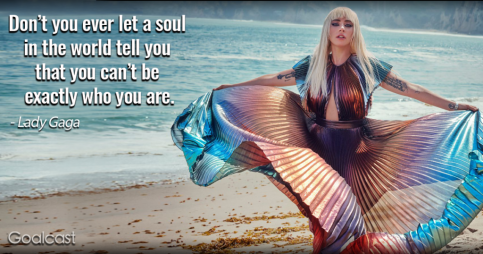 I don’t know if you follow my blog or not, but I know much of the Hollywood elite does so hopefully they’ll direct you to this soon enough. 🤨

Anyhoot, I’m going to be honest with you since I’m trying to be as genuine as possible and I know you do the same.  When I first started noticing you due to your amazing talent (much like mine), I thought you were so bizarre and strange that I was a bit put off.  I’m embarrassed of that reaction now because I’m the first to preach to not judge a book by it’s cover and here I was doing the same.  Then I saw you in a “Star is Born” (is Bradley as good of a kisser as I imagine him to be?), and was blown away by your natural beauty, acting ability, and the vulnerability you showed in the role which, seemed to me, came from a real place within you.  Some things you just can’t ‘act’ (I’m somewhat of an actor myself…I was the ‘mama bell’ in my debut in the first grade).

As I started reading more and more about you, I realized what a genuine, brave, and influential woman you really are, and that’s when my girl crush began.

I’m so sorry you were a victim of rape when you were only 19.  To experience this is horrific and so many women are scared to speak out because of the stigma that’s still in existence today.  Why in the hell do we blame victims in our culture?  As far as we have come with things like the #metoomovement, we still have a long long way to go.  Your song “Til it Happens to You” is an inspiration and speaks for the millions of women who have suffered rape and sexual abuse in our society.  I was sexually abused for 2 years and it took me decades to talk about it publicly because of my own shame.  It’s still uncomfortable for me at times because I feel like people see me differently because of it.  Like I’m dirty or something.  Your lyrics helped me to get past some of that:

You are so right that although people can have empathy for victims (or actually I prefer the word ‘survivors’), they still can’t fully comprehend the effects rape and sexual abuse have on a person.  I’m so sorry you developed PTSD and psychosis because of it…how hard it must be to live with such consequences.

“I was raped repeatedly when I was 19 years old, and I also developed PTSD as a result of being raped and not processing that trauma.  I did not have a therapist, I did not have a psychiatrist, I did not have a doctor help me through it.  …All of a sudden I started to experience this incredible, intense pain throughout my entire body that mimicked, actually, the illness that I felt after being raped.” (interview with Oprah Winfrey 2020)

It took a while to admit you had this though, didn’t it?  You stated you were lying to everyone about experiencing this mental disorder and ‘coming out’ freed you from that deceit.  I can’t imagine how painful it was to do so, but you helped so many people in understanding that mental disorders/illnesses are nothing to be ashamed of.  Thank you so much for that.  (I also love you came out as bi-sexual…your bravery humbles me).

You talk about how you received mental (and physical) help for PTSD and that’s another barrier you’ve broken for others.  Getting help is not weak…quite the contrary, it’s strong.  Until everyone can be taught that therapy and intervention is just as acceptable as getting treatment for any physical issue, there will still be people out there who won’t seek it because of that fucking stigma (my ma doesn’t like me to use that word, but I have a feeling you don’t mind).

How horrible you were bullied about your appearance and kooky behavior when you were younger.  Those words stick with you, don’t they?  But, you ‘came out’ again and have talked extensively about the bullying culture we all live with in terms of body image and expectations.  Women are told we must be perfect, from head to toe, and since that’s simply impossible to live up too, most feel inadequate in terms of how they look.  I know you developed anorexia and bulimia because of weight issues and I can relate to the anorexia myself as well.  It’s a horrible one, isn’t it?  And, like I know you are all too aware of, something that never fully leaves you (like bulimia too).  It can be an everyday struggle. 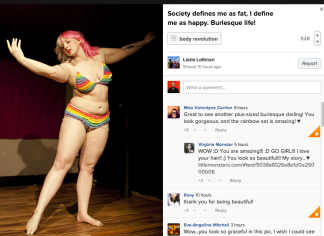 I happen to think you are absolutely gorgeous.  I’ve seen you a bit heavier (words you have used yourself, so please don’t think I’m being catty) and a bit thin.  It doesn’t matter, because your beauty transcends anything on the outside.  With your ‘Body Revolution’ movement you started in 2012 that allows women (particularly those with eating disorders) to share their real life bodies and put out there how beauty comes in all shapes and sizes, you’ve shown that being proud of yourself is the most important thing.  Bless you for that.  That’s something all girls and women need to do…see themselves for who they are and know they don’t have to be a cookie-cutter version of anyone else in this country.  I used to be so self-conscious about my belly, but now I’m not simply because it’s a part of me…and it’s real.  Thank you for that.

I also love the way you dress!  Once again, you don’t conform, but express yourself however you desire.  Who’s to say what’s ‘fashionable’ to wear anyway?  Who sets that stupid standard?  When you look back at 70’s fashion, it’s obvious that some of the trendsetters are idiots.  We should all be able to wear what we want to wear…not what the magazines tell us is ‘right’ to wear.  Face it, we look like sheep: the same jeans…the same shirt…the same shoes.  How boring it is to simply be another body clothed in what everyone else is wearing; it’s almost like we all have uniforms (actually it is like uniforms since uniformity seems to the be goal) and for you to stand out like you do shows we can have personal expression in our clothes.  Plus, I believe that if we all look like sheep we’ll start to act like sheep and mindlessly follow anyone without question.

Finally, I can’t thank you enough for talking so openly about your love of God.  How refreshing to see an ‘unconventional’ woman speak about her beliefs and faith.  There’s this stereotype that Christians are uptight, hypocritical (“I don’t go to church…everyone’s a hypocrite.”  Really?  You are the one judging us, dumbass 🙄) with no love for anyone different than themselves.  Where the fuck did that come from?  Why are there so many stereotypes about Christians that people are more than happy to not only believe, but share?  I’ve been told by colleagues (literally) how ‘dumb’ I am to believe in God and that I should know better since I’m educated.  Okey Dokey.  Thanks for that info…I’ll file it away where I file away all the rest of the bullshit I hear. 🙄

Anyhoot…just wanted to tell you what an influence you are on me and how I appreciate all you’ve done in being so open about who you are and what you’ve gone through in your life.  You inspire so many, including myself.  I am going to try to continue working at doing the same the best I can and for that, I’m eternally grateful.  ❤