So, my son and I were yacking while doing dishes last night, and we got on the topic of forgiveness.  You see, his best friend found out his wife was cheating on him.  After a week of thinking about it, the friend decided to go back to her to give their marriage another shot.  I told my son I thought it was great they were going to try to build up their relationship again, and O said this: “Mom, you can’t do that.  It will never be the same.”  I argued and said it could be, if she worked diligently at building up trust.  Again, he said: “MOM…it will NEVER be the same.  He won’t be able to look at her the same way ever again.”

So I’ve been pondering this for a couple of hours, and I’m thinking he may be right.  (He’ll probably be floored by that sentence if he reads this…rarely do we ever tell each other we were right about something).

Anyhoot,  let’s look at forgiveness.  To forgive something is to release it from yourself.  To let it go.  “To remember without anger.”  (I don’t know where I read this, but I love this particular definition). 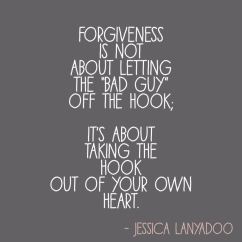 If I lend you a thousand bucks, and expect you to repay it, that’s only right since it was a loan.  BUT, if I say “Follower, I forgive you that loan.  You’re clear.” that’s something else.  You have been released from the burden of that loan.  I can’t go back later and say, “Hey, forget what I said, I want my money back.”  NOT FAIR!  I have already forgiven the loan.  Excused it.  Cleared it.  I wiped your slate clean.

Get my drift?  You can’t say you TRULY forgive someone if you are going to keep bringing the issue up.  Keep picking at it.  Keep looking at it under a microscope.  If you say “I forgive you”, then you pack it away and lock it up.   Let’s take a look-see at  cheating, something so many people will face in their relationships.

As we know, forgiveness isn’t always asked for by the person who cheated.  It may not be ‘fair’ to give it to them.   The person may not deserve forgiveness at all.  So, you have to forgive them for YOU.  You.  Because if you don’t, the anger, betrayal, hurt, etc. will feed off of you again and again and again.  But, forgiving doesn’t mean forgetting.  It means you have become smarter from the experience you went through.

I know of whilst I’m speaking (I feel like typing formally tonight and am feeling quite British after watching Rocketman for the 10th time.)  As I’ve said in past posts, my last partner cheated on me with his ex-girlfriend during our 3 year relationship.  The first time was during a month stint when she was visiting from another state, and decided to stay with his family.  He was living with me at the time, but chose to sleep over at the family home too.  You know, just to protect the stuff (old clothes that no longer fit) he still kept there.  Mind you, he hated staying there and never did after he moved in with me,  but ya gotta protect those pants. 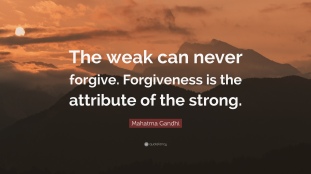 Then, he cheated on me the last time I saw him in October:  Him naked…with another woman right there.  So I ASSUME it was cheating, although I didn’t actually SEE it.  For all that is holy, I am grateful for at least that.

After that first summer of his cheating a couple of years ago, I couldn’t forgive.  No way, Jose’.  I think it’s probably because of a few things:  first, he lied to me the entire year before he cheated in that he assured me he never spoke to her,  never made plans to see her, never e-mailed her and blah blah blah.  Second, it was over a month period, with a week here and there in-between seeing her, and he swore to me, actually held my hands, & looked me in the eye, and promised me it would never happen again.  Because he loved me. Not her.  (When she was here the last time, he proposed to her.  Just saying.)  And I took him back.  Again.  Again.  And again.  (Don’t say it…I know what you’re thinking).  Then I said I forgave him.  I lied.

I wanted too.  I truly did.  I loved him so very much.  I was deeply invested in his life.  His kids were a joy to me and I still adore and miss them terribly.  I saw so much in him he never saw in himself.  I understood his personality disorder because of my mental illness.  I knew he had PTSD from his 3 tours in the Middle East.  I wanted to give to him everything he never got from his family.  I wanted to forgive him.

So, I said the words, and I thought I meant them.  I was ready to go back to the way things had been (which wasn’t a good place either when you think about it.)  I said: “I forgive you.” 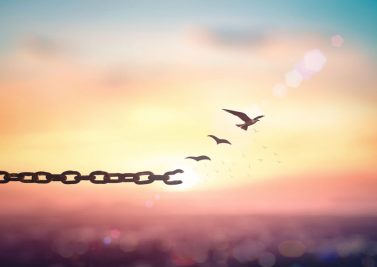 But I couldn’t stop checking his phone.  He had lied about texting and calling her for an entire year BEFORE the cheating…I had to see his phone all of the time to make sure her number didn’t pop up.  And yes, I’m sorry to say I checked his cell billing too.  When he’d be out and about while I was at school, I’d ask him where all he went.  I looked at envelopes in his mail to make sure she wasn’t writing to him.  And this pissed him off.  In fact, he told me this behavior was why he was cheating again.  Because I was making HIM upset due to this invasion of his privacy.  It made him stress out.  It made him uncomfortable.  So guess what I did?  I apologized.

Now, here’s the irony of the situation.  I was thinking about him last October, after an argument we had on the phone.  And while I was stewing about it, I finally realized I had a choice:  I could forgive him and rid myself of this horrible behavior I hated to be doing,  the angry feelings I was feeding into everyday, and the words I’d say to hurt him like he hurt me; or, I could continue being with him in a way that caused so much stress and rife in my life, that I was making myself sick and ashamed.  So, I chose the first.  And here’s what happened:  I said to ME, “I forgive you, Guy.  I’m letting it go.”  And I swear that the burden I’d been carrying for those couple of years began to lift off my shoulders.  I know it sounds preachy, but it did.  I could finally remember all those things without anger.  I packed it away and threw away the key.  It was such a relief.  So I went to tell him the next morning and you know the rest (as does his girlfriend who screamed at me in the hallway of ‘our’ apartment).

I’m never going to forget any of this.  It’ll fade.  It’ll become something I don’t tear up about at times, but it will always be there.  I’ll always remember, and I’m building up better boundaries, trusting my instinct more, and working on my self-love because of it.  I’m remembering without anger.  I’m forgiving, but not forgetting.  Instead, I’ve turned all of that negative energy into positive stuff I’m using for me.

And to tell you the truth:  it feels fucking great.

Hi, I'm Avisha Rasminda Twenty One years old, Introduce Myself As A Author , Painter , A Poet.